For TBT: A Bunch of Roses

This week I was surprised to learn from my Great Aunt Edy that my maternal grandmother Ruth’s original name was Rose Marie, but that her mother decided to change it early in my grandmother’s life to Ruth Margaret.

This struck me as quite amusing, because on the other side of the family, the name Rose appears very frequently, making searches for genealogical records a bit confusing. In fact, my grandmother, great grandmother, and great great grandmother all had the married name Rose Dubnick. And I have found a record for at least one other Rose who married a man with the last name Dubnick, although I do not yet know whether they are related to my family. It’s very strange to be searching for such an unusual surname and to find that there are many different people with the same combination of first and last name.

More than anything, this indicates the popularity of the name Rose among Jewish immigrants to the United States in the early twentieth century. According to Warren Blatt’s essay “Jewish Given Names” in the Avotaynu Guide to Jewish Genealogy, Rose ranked #13 in popularity for women’s name among “Most Popular Given Names for Jewish Immigrants in U.S.” (Blatt, table 3).[1]

Among men’s names, Hyman ranks #13 in Blatt’s list. Hyman is my maternal grandfather’s name, and he generally went by the nickname “Hy.” My paternal grandfather’s first name was Herman, but he also went by “Hy” (his Hebrew name was Chaim). So if my great grandmother hadn’t decided to change Rose to Ruth, both sets of grandparents would have gone by “Hy” and “Rose.” 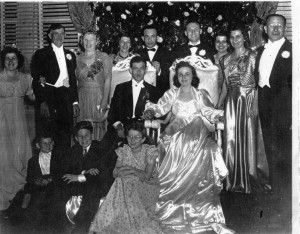